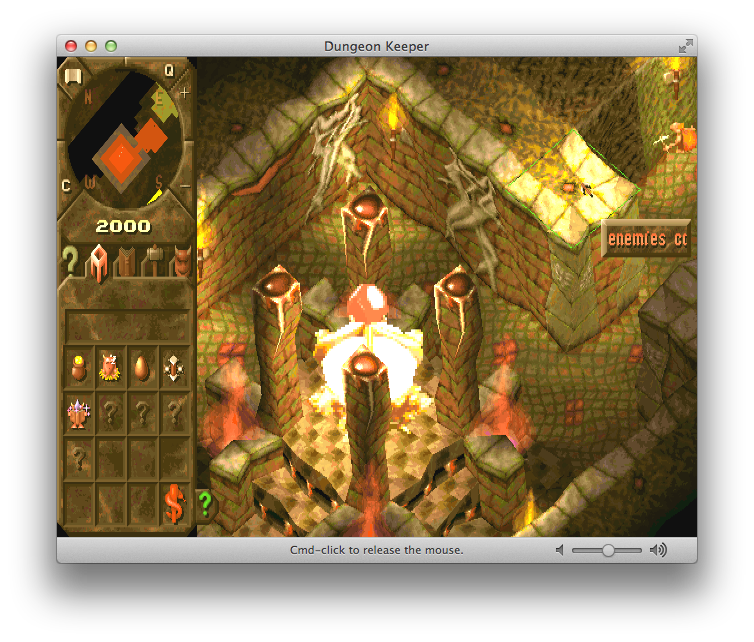 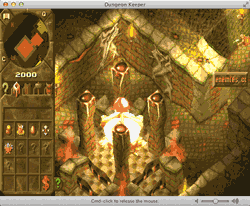 While they cannot compete with the graphical quality of today’s games, I still have fond memories of games of the past. While I played most on my C64, ports of games of these days do not feel very stratifying. My two favourite games in those days, paradroid and Elite have been re-written as FreeDroid and Oolite, I find neither fun to play nowadays.

Dungeon Keeper is a DOS game from 1997, I never played it, but I loved the sequel, Dungeon Keeper II which game out two years later and was a Windows game, so when Good Old Games released Dungeon Keeper for Mac OS X at 5.99$, I just bought it.

In Dungeon Keeper, you control the heart of a dungeon, building up the rooms of the dungeon, hosting, feeding and training you minions to defeat either the human adventurers that visit your dungeon or competing dungeon keepers. The game takes ideas from real-strategy games, with a good sense of humor: your units fight among themselves, have different personalities and require some management.

The game appears as a simple Mac OS X application, hidden in the bundle, there is an instance of DosBox that basically runs the original game. The game is fun to play, as the graphics are quite blocky (S-VGA graphics, remember), I prefer playing in in windowed mode. The game playing flawlessly for me, and is quite fluid – which you would expect running a game designed at a time when 100Mhz was the best you could get, running on a 2.4Ghz machine.

While certainly not as engaging as the sequel, Dungeon Keeper is a fun game, which ads a twist to the classical fantasy setting and the general roleplaying game with dungeons trope. I would certainly recommend this game to anybody who designs dungeons, while laughing with an evil laugh. Despite the low resolution, the graphics are pretty nice, with many nice touches, like the wall decorations

I really like the idea of refurbishing old games for a moderate price: 6$ is certainly worth the hassle of not hacking around with emulators, and such games have a much clearer legal standing as abandon-ware. My only wish would be that Good Old Games releases Dungeon Keeper in the same format, as Dungeon Keeper II is a window game, this might be a bit more complicated.

While this might not be considered a real game by today’s standards, the price is anyway that of an phone app, so there is no big risk in buying it.