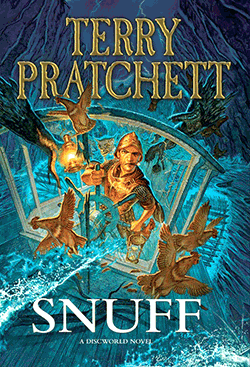 Yesterday, I took the day off an spent the day at the Badi in Wollishofen. Badis are bathhouses on the lake of Zürich, with showers, lockers, a cafeteria, a nice taal tree and a box full of books. Although the box contains some Terry Pratchett books (Diggers, if I recall correctly), I had brought my own: a copy of “Snuff” that was lent to me by a friend. So I bathed and finished reading the book in the sun, and managed to get some sunburn, which is very astonishing because the weather was quite cloudy.

Snuff is a new adventure of Commander Vimes, of Ankh-Morpork fame, this time he goes on holiday in his wife’s country-side house, of course, there is a crime, and then something bigger, so the holidays are far from dull. While most of the action happens in the country-side, part of the action happens in Ankh-Morpork, so all the characters of the guard make at least a token appearance.

The book basically follows the classical recipe of recent Disk-world books, it is well written, and gripping and I enjoyed reading it. I found the shift of Vimes becoming old and respectable interesting, but the story basically fell appart once I put down the book.

First one can feel that Terry Pratchett is getting really old, I felt more dramatic tension in one posh dinners than in the fights, this reminded me of “A Civil Campaign” by Lois McMaster Bujold, where the most dramatic moment was a family dinner going quite wrong.

Second, the character of Vimes is starting to collapse on his own weight, he now has a bazillion titles, he is the protégé of the Patrician, and since the book Thud! he has magical powers. All this power undermines the dramatic tension, as no-one really believes that anything really bad can happen to him or his family. A small part of the book is devoted to Vime’s internal struggles, but it is minor and felt like an afterthought. I think Sir Commander Vimes is starting to be way to much of a Mary Sue for Sir Terry Pratchett. I also found that the way Vime’s child is described feels a bit to much like an introduction, that we are soon going to get the adventures of Vime’s son.

Third, the parts of the story besides of the country-side where Vimes resides feel hollow and artificial. The whole Sergeant Colon sub-plot should either have been the center of the story or been removed, it just feels like some filler to justify having the other characters coming around. This also seems to be a trend with older authors, everything needs to become some kind of family reunion. Even Nobby Nobbs finds a girlfriend in the last chapter.

In summary Snuff is a pleasant read, showing that Terry Pratchet can do his usual tricks quite well, but it probably won’t leave any lasting impression once you finished reading the book. This is certainly not him at his best, the writing is good: but the story below it feel increasingly hollow.