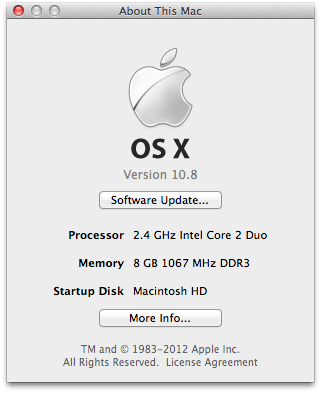 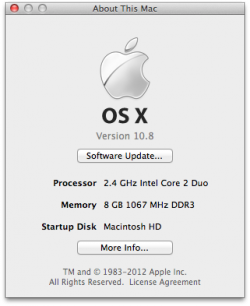 I installed Mac OS X 10.8 on my laptop this week-end, and as far as operating system upgrades go, that one was pretty uneventful. The only problem I encountered was Calendar, iCal’s replacement, getting very confused with my preferences, so I needed to erase them and recreate them. This was trivial, and given the amount of hacking, dog-fooding of internal APIs and general abuse that configurations had received over the years, this was a much needed reset.

Ars Technica, has, as usual, a very long and thorough review. From my perspective, the changes were minor and mostly welcome. Safari is more stable, Address Book has again a usable structure, and there is Reminder application that is equivalent and synced with iOS. RSS feeds are officially dead, which as far as OS X support goes, is no drama, the built-in applications never supported RSS properly. I’m much more annoyed about the death of RSS as open-format as opposed to the social networks.

Under the hood, the main change is certainly gatekeeper the code signing and sandbox system. Generally speaking, desktop applications have way to many permissions, and so being able to control what they do is a good thing, as far as I’m concerned this is just the continuation of having memory protection and pre-emptive multi-tasking. Also being able to set up a Mac in a way where it only runs code from trusted sources is a very much desired feature, in particular for machines used by non savvy persons. I also think it might be a good idea to adapt command-line tools to use the sandbox API and limit their access, awk should never open a network socket, so why not declare this at startup time?