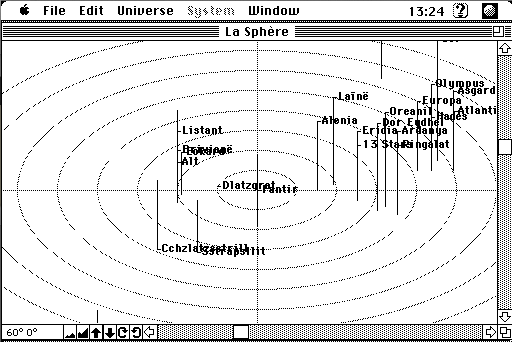 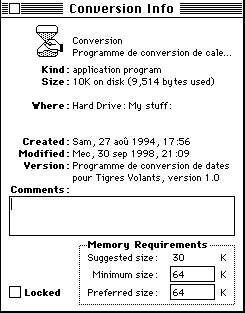 Ars technica had a nice post about Cracking the Agrippa, an old cryptographic puzzle dating from the classic Mac. The second page includes instructions to set up an emulator running Mac OS 7, and I have recently recovered the binary file of some very old programs I wrote, so I set-up a virtual machine a tried running my old creations.

There were two programs: one that was doing simple date conversion from gregorian year to the system of the elves in the (paper) RPG I friend of mine wrote, Tigres Volants. The second, more ambitious, did a 3D projection of the solar systems in that RPG game setting, using an Elite style display. Unsurprisingly the second program crashes (in those days I was developing on a colour Mac, and never really tested the thing on a black and white Mac), but the first program still runs. 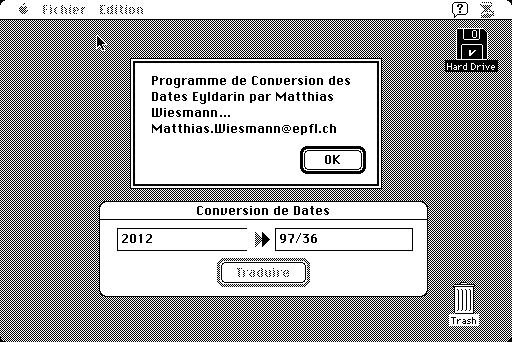 The date conversion program would be trivial to rewrite in Javascript, and I remember rewriting the map program in Java using AWT. But in those days, writing a GUI was not so easy, as you had to write all the event handling code yourself. On the positive side, binary size was very small: the date conversion binary is 9514 bytes long and includes icons and information text.

I wrote those program while at the university, but probably recompiled them, or at least edited the resources during my PhD at EPFL (hence the e-mail address). I have since then lost of the source code, it might be rotting in the old Jazz cartridges that are rotting away in my cellar, for which I have no working drive anymore.

If you want to play around, I have created a small disk image (64K) that contains both binaries.

The second program is not the 3D map of space, as I had though, instead it generates a color-map of a planet based on the hash of the name and some general data. I work nicely in emulation on a color-mac. 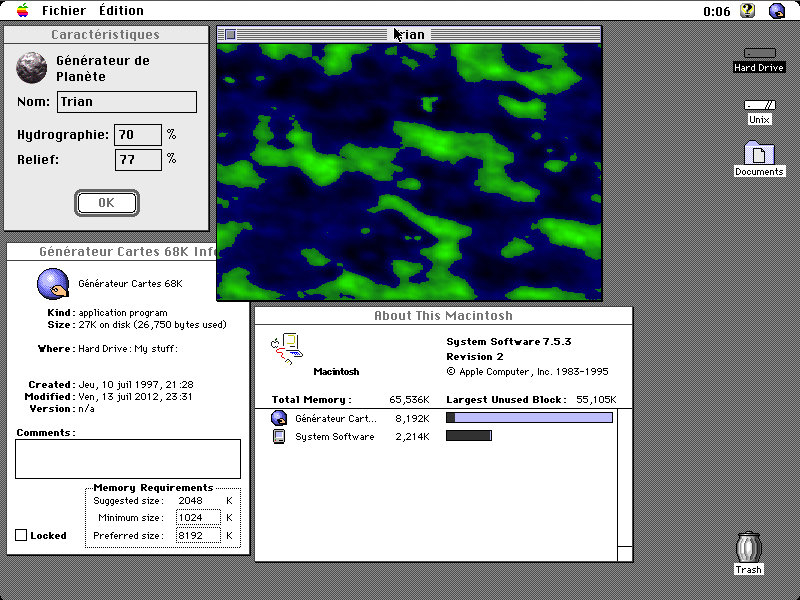 Now that I have a working emulator, going through the archives is much easier. So I found the binary (and the source code) for the space map application. So I created a second disk image with the application and the data file. Because of the data, the file is much bigger: 680K.