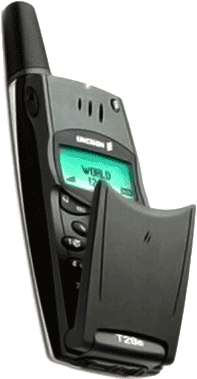 A few days ago, I wrote a post about screen resolutions, and I wrote down the 176×220 pixels for the screen size, but this was just the resolution of my two previous phones. Today, I remembered the phone I previously had before leaving for Japan: an Ericsson T28s. Compared to the phone I discovered in Japan, this was a really dumb phone: 101×33 monochrome display, only two games (tetris and solitaire), no storage, no external connection, no camera, no way to store anythings beside phone numbers.

Still this was a some point very desirable corporate phone, it was the smallest phone I ever had: 82g whereas my iPhone 4 is nearly the double at 137g. I liked the clamshell like design (and stayed true to this design for quite some time). As I had a second hand one, the battery life was not so great, generally two days in standby. I find this phone interesting because for me it was the last of its kind: last non-feature phone, last non-Sony Ericsson phone, last non-data phone it was also the last phone with a visible antenna and a connector for an external antenna.