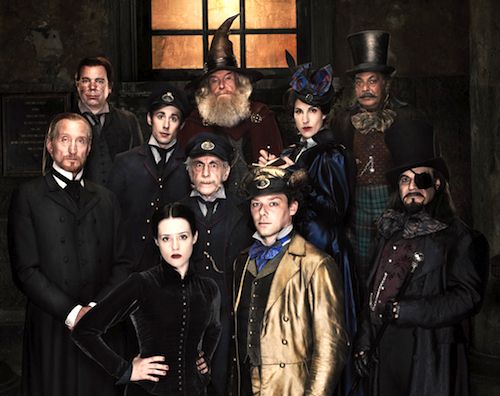 Yesterday, I watched the two part telefilm of Going Postal, based on the book by Terry Pratchett. There have been other cinematographic adaptations of Diskworld novels, but the quality has been quite variable. This one is, in my opinion, the best one to date: less of a children’s tale and more a steam-punk story poking fun at the internet age.

In the city of Ankh-Morpork, the patrician forces a crooked sentenced to death to take over the crumbling office to compete with a company that operates a new technology, the clacks, a system of light semaphores that have been invented recently.

The main actors, Claire Foy as Adora Belle Dearheart and Richard Coyle as Moist von Lipwig felt convincing and the contrast between the two characters plays out well. I was less convinced by the bad guy, Reacher Gilt, played by David Suchet, which somehow felt flat. The sets where are gorgeous and made me realise the extent to which the Discworld morphed from a fantasy city into some victorian metropolis in the course of the novels.

Having the story split between two part for a total of 185 minutes means that a the story and the characters could be developed. I think that the story works by itself, even for people who have not read any discworld books. In the end, I suspect the most obscure jokes are the ones about the hackers and the clacks. So in summary a very good movie I recommend to anybody who wants to see something light-hearted in a colourful world.