This February, Sony did something unexpected: it did something smart. Included with the release notes for firmware update 4.11 is the following text

The Internet browser has been updated for improved content display.
Some websites that could not be displayed correctly, including interactive websites, are now supported, and page layouts are now displayed with better accuracy.

Playing around revealed something interesting: the web-browser is webkit based, version 531.22.8 according to the headers. Looking at the license acknowledgements, it looks like it is based on the GTK API. The browser has the same interface as the previous one, so the change is quite subtle, but CSS and Javascript supports has significantly improved, which is good because the previous browser was really bad. There are many missing features, including SVG image and video tag support, but this is a step in the right direction, and one can hope that Sony’s engineers can now iterate and add new features to the browser. 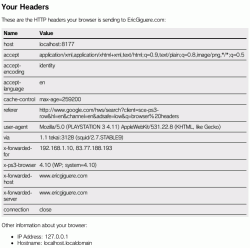 Given the fact that Sony won’t release a new living room console for a least one year, keeping the venerable PS3 relevant sounds like a good strategy to me.

What I find interesting is that many HTML5 additions designed for mobile phones are actually very relevant for a gaming console. Consider the following:

Video
The PS3 is typically connected to a TV or a big screen, and has hardware support for playing back H264 content.
Input forms
By default, the PS3 uses a soft-keyboard, so having specialised keyboards for numbers, e-mail addresses, and ranges would make it much more usable.
Vibration
Most PS3 come with Dualshock controllers which can produce vibrations. 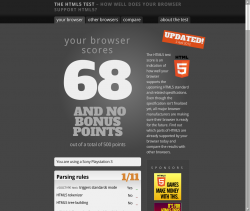 Media Capture
The PS3 can be equipped with a webcam and a microphone.
WebGL
The PS3 has respectable Open GL ES rendering capacities

I suspect the main issue is going to be RAM, the PS3 is now six years old, and has only 256 MB or RAM, but smartphones those days don’t have much more. I will be interesting to see if Sony updates the browser and at which pace, but at least it is now in a situation where progress is possible.