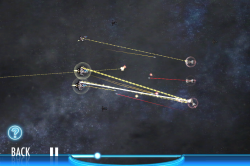 As I stayed home this week-end, I spend some time playing a small game on my iPhone: Starbase Orion. This game is relatively direct adaptation of the venerable Master of Orion II game to iOS. The names of the various races and technologies have been changed and a few things have not made the jump, but the game reproduces the gameplay of the old game well and is a fun game, and definitely worth the price if you like the original game.

For comparison, here the main things from Master of Orion II that are missing:

Generally the game is more centred on multi-player games, something which was a technical challenge 15 years ago, but is the main appeal of such games nowadays.
Given the large time gap between the two games, it is interesting to compare the specifications of the minimal machine they need to run.

This shows that a two year old smart phone has specs that are generally comparable to a PC from 15 years ago. Interestingly, some technological shortcuts from the PC area were avoided, 22 Hz quality sound, palette graphics, no GPU. Systems have way more RAM nowadays and more processing power (GPU + CPU), on the other hand stable storage is much more precious on phones, so the requirement has decreased. Finally, the prices in the table are for buying both games today, so the 15 years old version is only two dollars cheaper than the new software (but this includes two versions of the game). When it was released, Master of Orion II was way more expensive, the economic landscape has completely changed.