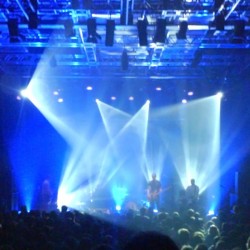 Mogwai is one of the groups that Angel made me discover. They also have two tracks on the soundtrack of the Miami Vice, which my brother likes to play a lot in the car. While I’m not an fan, I like the sound sufficiently to go along to the concert at the Rote Fabrik, which is within walking distance from my flat.
The first part was by the “The Twilight Sad”, which was OK, but somehow reminded me of many amateur bands: to loud, not structured enough. As soon as Mogwai started playing, you could feel the difference, the sound was unmistakable.

Listening to the concert, I could but think about Pink Floyd. There are similarities, but my thoughts were that Mogwai sounds like Pink Floyd if its members were from Generation X: less angry, more restrained, but also more sentimental, very feminine in a sense. The generational gap could also be felt in the way the concert went, at some point one of players asked people to stop talking, he had a point, but I was trying to imagine this happening in a Pink Floyd concert.

One thought on “Mogwai – Rote Fabrik”