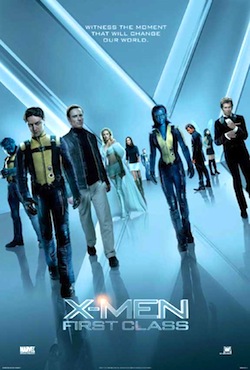 Keeping up with this year’s theme of sequels and prequels, we went to see X-Men: first class at the Pathé cinema in Dietlikon. While I generally find it annoying that Hollywood cannot even take the risk of a new story, my know­ledge of the Marvel franchise, and the X-men canon in particular is so slim that the whole movie felt largely like a inde­pendent movie. I knew that Charles Xavier would even­tually end up in a wheel-chair, but that’s like knowing that at the end of Titanic, the boat sinks.

The central story is the friendship between Charles Xavier and Erik Lehnsherr and the way they split along ideological lines and become respectively Professor X and Magneto. The story is set in the sixties, which I found a good choice for superhero stories, with the cold war providing the back­ground drama and a good opportunity to blow stuff up. Charles and Xavier build up a group of mutants to fight another group lead by an ex-nazi hell-bent on starting a nuclear war to trigger the rise of mutants. Among the good mutants, there is also a lot of questioning about being a mutant and social acceptance.

While it was nice to have some political questioning in a superhero movie, it mostly felt like a hollow echo of the black movement in the US, incidentally, the first mutant to explode is black. When you have a character that is supposed to be as super-smart as Charles Xavier, he would point out that a society where the mutants dominate because of their better abilities implies a society structured by the strength of the super-power, as those ability seem to be inherited, this is basically a strict cast system. Then again the good guy’s team ends up be lead by a billionaire with a PhD, while the bad guys are lead by the meanest of them, quite a progressive bunch of people really…

The most painful part of the movie was the foreign accents. The movie starts during World War Ⅱ, in the concentration camps, and we are supposed to emphasise with the plight of young Erik Lehnsherr, but I was stuck wondering “what the □□□□ is this german accent of Kevin Bacon”. Later in the movie, Erik is in Geneva and tortures a banker and speaks French, the accent was nearly as painful as the torture. While I think it’s great that characters in hollywood movies don’t always speak english even when it make no sense, there is still work to do on the accents.

Still the movie felt like a good pop-corn movie, with a lot of references and a nice graphical style. The bad guy feels like he’s out of an old James Bond movie, and I liked the short appearance of Wolverine. I liked the acting of the two main roles, and January Jones is perfect in the role of the 60’s blonde (Emma Frost), does she ever play something else? On the other hand, if you expect something deep about mutants and the relationship with humanity, just read Slan.

One thought on “X-Men: First class”