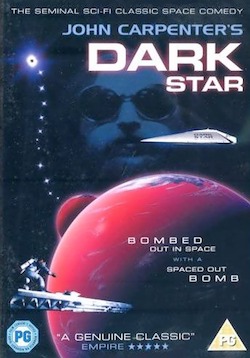 As some might have noticed, I tend to watch movies late, often years after their release. A friend of mine lent me Dark Star by John Carpenter a few months ago, and the DVD was gathering dust since – as the movie was shot two years after my birth, I supposed it could wait a few more months, as I as have been sick, I had some time to watch it.

Watching this movie was a fascinating experience: on one hand, it is a classic, and you can see many ideas that would be exploited efficiently in other science-fiction movies, the discussion with the sapient bombs is really a good idea. On the other hand, the movie is very dated: it is clunky and slow, everything is over-explained, and the cheesy special effects don’t help either. I would be tempted to say that somebody should just make a tightened version of this movie, but I realise this has already been done: in some way, both 2001 and alien are cut down versions of this movie.

In conclusion, a movie that is interesting in the academic sense, but not something I recommend if you are looking for a modern, functional science-fiction movie.