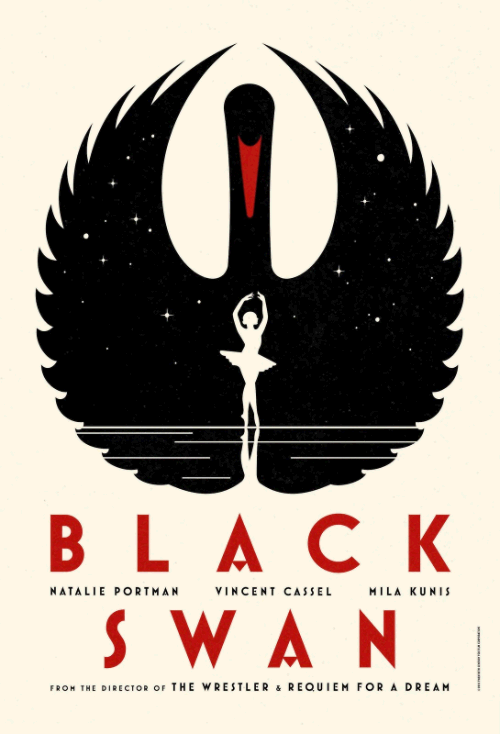 I did not really know what to expect about the movie Black Swan. It was too high profile to be the usual girls discovers hardship and friendship at the dancing school flick, which is a good thing, because I really wonder how many of those were produced, there seem to be one in every flight I took. I really liked the graphical promotion material produced for Black Swan, the one in the Art Deco style. Finally I’m late in my podcast listening, so I have not heard the good doc­tor’s critique of the movie. The only thing I knew for sure is that some girls I know loved it…

The movie is clearly not the dancing school type, has no relationship with the Art Deco period, and given the amount of sex and violence in it, I would not consider this to be a girl movie – then again I don’t watch so many of those, so maybe they have changed. The movie is, obviously, about ballet, and unsurprisingly, about a play of Лебединое озеро, aka Swan’s Lake by Pyotr Ilyich Tchaikovsky. The plot of the movie is basically a twist about the fight between the white and the black swans. Given the fact the compositor had such an influence on the whole movie, I was expecting to see him a bit earlier in the credits, but I digress.

The movie really surprised me, in a good way. The main theme is the dark side of ballet, and the strange relationship between a highly technical art and the highly emotional stories it tells. The underlying problem reminded me of the Nō plays where an old man would play an young girl: the result felt completely artificial to me. The plot of black swan is heavy with metaphors, but with enough twists and turns that I was unable to predict what would happen before the end. The movie is also about women: the only relevant masculine role is Vincent Cassel playing the raunchy director, and in the end he is more a trigger than anything else. As he is the bad guy of the movie, the french accent is de rigueur, maybe I should work on mine.

In conclusion a very good movie, with a grown-up take on the world of ballet. I would not recommend it if you are skirmish, or if you have dreams of your little girl becoming a ballerina.