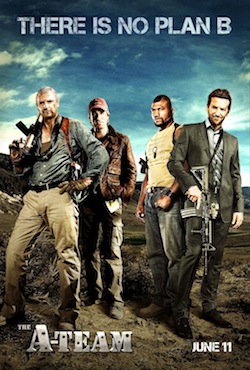 On my flight back from California, I watched the movie A-Team. While the viewing experience is quite different from the what you would get in a cinema, you get the added special effect of turbulences, which is somehow appropriate for action movies.

I used to watch the TV show, which was called in French L’agence tout risques which could be translated as all risk agency and liked it a lot, in parti­cular the scenes where the team buildt stuff. The whole idea that some­body would adapt a TV show into a full length movie is still kind of strange to me. I know that batman was originally a TV show, but not one I saw. I selected that movie in the plane, mostly because I as­sumed that it would not require to much of a working brain.

I found the way the characters evolved fascinating. Com­pared to the eighties, they all look tougher, more grizzled and are more credible rangers. Murdock, which was called Looping in French, was very easy to recognise and close to the original. I found Hannibal had a weaker presence that the original character. One reason might be that in the french-dubbed TV-show, Hannibal had a really nice, deep voice. In the beginning I had a similar feeling for Baracus (balled Barracuda in French): filling in Mister T’s shoes is not an easy job, but I eventually got used to the new guy. I found that Face which in French was called Futé (Sly), was the most different from the original show, but at the same time I found him quite believable as a seducer.

The movie itself is a completely standard Hollywood production. The plot has all the mandatory twists, including the Scooby Doo end-reversal (spoiler, the arab is in the fact the general). While there are a few fun bits (most of them in the trailer, I suspect), the whole movies does not really hold together, it is literally all over the place. I found the idea of having Face do the plan intriguing, but the resulting plan did not seem to have any face specific aspect. In the end, I mostly felt the absence of the part I loved: the building sequence. There is a little bit of it, but as the plan has to remain a surprise for the viewer, you only see the building of small parts, and in those days of maker fairs, what they built felt very lame.

One thing that surprised me was the care taken in making things realistic. Many movies claim to happen in Europe, and in particular in Switzerland, but very often the details don’t match. The Bourne conspiracy had a sequence happening in Zürich, but the streets were in Prague, and the cops spoke with a strong north-german accent. In A-Team, they even got the Swiss car’s license plate right, so this is a welcome improvement.

In conclusion I had the feeling that the parts of the movie (acting, sets) were quite well done, but the whole just did not stick together. Hollywood needs to realise that if the twist is always there at the same time, it is not a twist. Given the care and probably the money which went into this movie, getting a proper script would have been a wise investment.