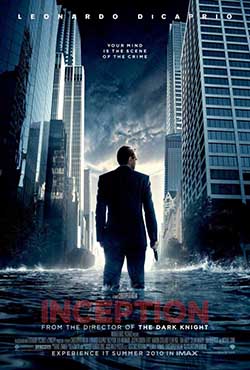 Inception by Christopher Nolan was one of the few movies I really wanted to see in the cinema. Memento by the same Director is one of the best movies I ever saw. In his BBC podcast, Dr. Mark Kermode also gave it quite a good review, so this sounded very interesting.

The movie is basically about dreams within dreams, and the fact that once you go from one to the other, the questions of level 0, reality, becomes confusing. This is by far not the first movie I have seen on the subject. The Matrix, of course, comes to mind, but also Avalon or The Thirteenth Floor, or the Ghost in the Shell all touch the subject.

Knowing Memento and some of those movies, I was some­how expecting a complex movie: Kermode recom­mended that you make sure you don’t need to go to the toilet before you go in because if you miss anything you’ll be lost. I did not have this feeling, this is a Hollywood production, where things is made clear, explained. I found the first half of the movie quite slow, as this is basically a tutorial on the subject of realities. Then again multiple reference planes, recursivity are notions I manipulate daily. The movie is basically some mind manipulation going on on four levels of realities with different time-scales. There are basically two missions going on in parallel, one is the actual job, the other is main character’s personal quest.

If you consider this, you realize this is a complex Hollywood movie, as this is way more complex than say, the plot of Avatar. I also think this is a good movie, in the sense that I cared about the characters which had way more depth and feeling than they usually have in the movies on this theme. I felt that the performance of Leonard di Caprio was somehow flawed, but maybe I’m not in the brooding pretty boy thing. I liked the other members of the crew way more, as they felt more genuine. The japanese boss was an interesting addition, I liked the character and the acting, and even though his presence felt somehow contrived in the beginning I suppose it made sense in the end.

All in all, I think this is a good movie, worth my entrance ticket. I’m probably partial to the central theme of the story, but I really like it. The movie is not something edgy, conceptual, or ground breaking, but a solid hollywood movie, with a solid plot but also some human elements. My main fear is that now there will be boatload of average joes explaining how deep and philosophical it is. On the other hand, I think Mark Kermode has a very good point, if this movie will be a blockbuster, then there will be no excuse for Hollywood for producing more crap. That in itself would be quite an achievement…