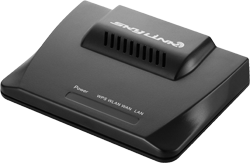 One cool toy I bought while I was in Japan was a Logitec LAN-W150N mobile access point. This is basically a very small (94㎜ × 70㎜ × 20.8㎜, 70g) Wifi Access-Point that draws its power from a USB port, it has three ports one USB for power, and two ethernets, one that connects to the WAN, and one that exports the LAN. Configuration is done by the way of an Web interface (in Japanese only) exported on a special IP address.

So what is the point of such a device? Basically this makes it easy to share a wired internet connection for devices that have only a Wifi interface (like for instance an iPhone). Many people I visited during my trips only have a single computer connected to an ADSL/cable router using a ethernet cable, and it is quite common in Japanese Business Hostels to have only an ethernet socket in the rooms, so I just need to plug in this device, to have my own, WPA-2 protected network.

The device that was hawked in most shops was also a Wifi Access point, but one that would share a 3G connection. Using such a device, an PSP, a Nitendo DS, or an iPod touch would be constantly connected. I found it interesting because this is a work-around for the lack of 3G connectivity of popular portable gaming gagets.