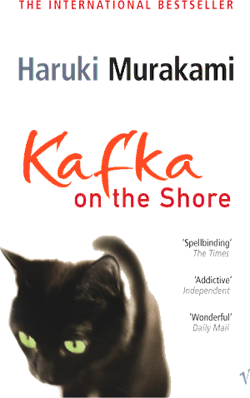 For my birthday, Péter gave me the book “Kafka on the shore” – – by . It was lying on top of my to-read book pile for some time, but I took it with me during my trip to Nancy, and basically read in in one week-end in the train. Basically I did not see the time fly by during the train ride, neither did I sleep (something I often do in the train). As I had no idea what kind of book Kafka on the shore was, It was a complete surprise, I first though it would be some weird murder story, but the story revealed itself as something more complex and interesting.

The overall story somehow reminded me of the Tim Powers‘s stories, in particular the book “Expiration Date”, where a teenager runs away, discovers the world and slips into a parallel world where strange things exist. In both cases, the story is a quest to restore some balance, both inside the characters and in the outside world. While the general themes are similar, the styles are quite different. Tim Powers’s writing have a certain energy, I found “Kafka on the shore”, more complex and subtle and better written, even though I read a translation. It is a book I had pleasure to read and might read it again, just to find the many small things I certainly missed.

One thought on “Kafka on the shore”