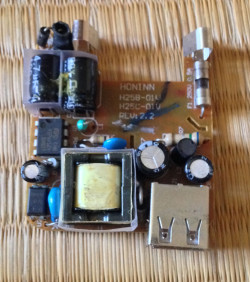 One of the annoyances of electronic devices in the past used to be the myriad of power supplies, each with their own connector, voltages. They were all black and you would always mix them up or misplace them so that the relevant device would become useless.

USB solved this problem, which is kind of surprising because USB was first a data connector that happened to carry some power. The upshot is that you can use any USB power supply to charge any device with a USB connector.

These power-supplies typically have a longer life span than the device they came with, so they tend to accumulate. I was wondering what the difference is, so I ran a simple test on all of them: charge the same device, a Nexus 5, and measure the output of the various power supplies.

I only measured the supplies that have a USB A female connector – many power supplies have either a male micro or a male mini connector. I also tested various devices with such a connector for comparison.

The first thing to notice is that the LG power supply barely meets the USB specification, which requires a 5 volt output ± 0.25 volts. The second is that while many power-supplies have similar sizes, their output changes quite a lot. The relatively low output of the Google power supply was expected, as it is meant to be used with a Chromecast, which consumes 2 Watts at peak.

Similarly the output of the Apple A1205 power supply was expected, as it was originally meant to recharge an iPad. The output of the Steffen Swing Steko power plug was a surprise, with nearly 3.5 Watts of output, officially it can output 500 Milliampères per connector (there are two).

So while there is a standard, it is pretty undefined what actual power you get from a USB plug, the actual USB spec only mandates 500 millampères, which is what the Denon amplifier provided. As often, it was nearly impossible to know beforehand how the various plugs would perform: LG is a pretty well know brand and the Jet AC Adapter I got from some small shop in Akihabara. Testing seems to be the only real way of figuring out; I also figured out that one adapter I had, a Protek PAC – 1200 WH was dead. I opened it up and used the board for the image of this blog post.

What would be interesting would be to measure the efficiency of these power-plugs, sadly the device I have to measure power-consumption is not that precise, so it does not see their consumption.