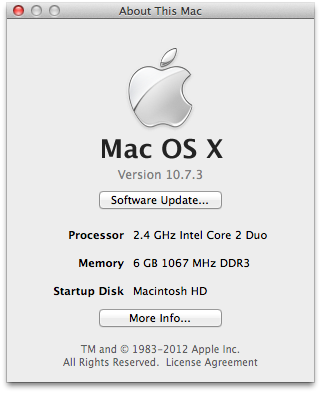 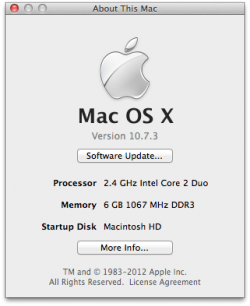 I have recently started doing page layouts of old RPG scena­rios. While this is much easier using a Pages and a modern laptop than say, using a Mac Classic with a 9 inch screen, I also work with much higher reso­lution images. Between Lion, Pages and Photo­shop Ele­ments, 4 GB of RAM started to feel a bit con­strained. So I decided to buy some addi­tional RAM for my 13-inch, Mid-2010 Mac­Book Pro. My favourite hardware supplier had some Mac Memory Memory Kits by Corsair with two 4 GB 204 pins SO-DIMM DDR3 1333 Mhz chips which was quite cheap. The kit did not list what machines it was compatible, but just claimed to be compatible with .

Installing the memory was pretty easy, unscrew the back of the laptop and the two slots are immediately accessible. After I installed the two chips, the laptop froze, I tried swapping them, the laptop still freezes at boot, so I replaced one of the 4 GB chips with an old 2 GB chip, and the laptop boots happily and recognises the memory. So I just assume that the other chip was somehow broken and returned it. Of course, as this was a kit, I got an e-mail telling that I needed to return both chips. Inconvenient. I got the replacement chips yesterday and mounted them this morning. Same problem. Basically the machine boots with one 4 GB stick, but not two.

Most of the forum where full of people with similar problems, but no useful answer, i.e. a lot of people saying the chips were bad and to replace them, until I found this post on Tyler Milner’s blog. The core problem is that the Mid 2010 MacBook Pro can only handle 1067 Mhz memory, if either chip is a 1067 Mhz the other 1333 Mhz chip is slowed down by the memory controller. But if both are fast ones, the memory runs at 1333 Mhz, which the CPU cannot handle. I find it pretty annoying that the MacBook’s memory controller cannot handle this situation and that Corsair’s compatible memory isn’t.

Currently my laptop runs happily with 6 GB, which is not too bad. I can now either flash one of the 4 GB chips to lower its frequency, like the linked post suggests, this involves booting into Windows. The other is to find someone willing to exchange my fast chips for slower chips. The problem seems to be that it is not easy finding 4GB 1067 Mhz chips. Compatibility, just like in the good old days…

4 thoughts on “This RAM is too fast”